Fowler, Young, and Fox Inducted in The Ocean Energy Center Hall of Fame 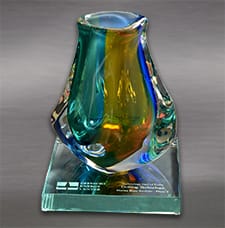 Joe Fowler, Ron Young, and Allen Fox were recently inducted in to the Offshore Energy Center Hall of Fame for their contributions in Drilling Technology, specifically in the area of Marine Riser Analysis Phase 2 (1973 – 1985).  The Pioneering Technologies Award recognizes important technologies and the development of those technologies by individuals, companies, organizations and/or institutions in the fields of offshore technology.

Fowler, Young, and Fox were instrumental in the development of the pioneering software program called DERP, created by Stress Engineering Services in conjunction with Exxon Production Research Company.

DERP is a static and dynamic marine riser design and analysis software program.  The program is a small displacement planar-model formulated in the frequency domain and includes improved linearization of the hydrodynamic drag term in Morison’s equation.  This feature allows for excellent comparison with time domain results for both regular and random waves.

The data provided by DERP has played a major role in the development and use of marine risers over the years, and has also been essential to the operations in deepwater and harsh offshore environments.

The 2014 Pioneering Technologies induction ceremony and reception took place on September 20th at the Offshore Energy Center in Galveston, Texas.

Fowler, Young, and Fox Inducted in The Ocean Energy Center Hall of Fame