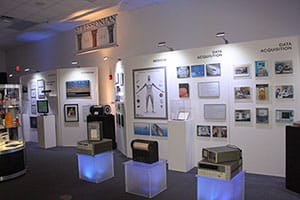 The “Stressonian” exhibit showcased the dramatic technology changes in Stress Engineering’s many service areas since the company was founded in 1972. The exhibit highlighted the progress in the fields of analysis, design, and testing including finite element analysis, metallurgy, strain gage and instrumentation technology, software, load frame technology and computing power. Also on display were some of Stress Engineering’s successes such as saving over a billion pounds of plastic through their advanced analysis capability applied to plastic consumer packaging.

A portion of the Stressonian exhibit was devoted to the year 1972 – the year Stress Engineering Services began operations. On exhibit were various artifacts from 1972 in the areas of news, sports, entertainment, pop culture, and business.

At the event, Stress Engineering’s co-founder and president, Joe Fowler, spoke on “The Factors That Define Long Term Success.” In his speech he described the key factors that have contributed to Stress Engineering’s 40 years of success. He also presented Reach Unlimited Inc., a group dedicated to providing quality support services for people with intellectual and developmental disabilities, with a $10,000 donation on the behalf of Stress Engineering Services.