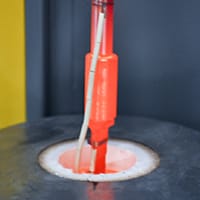 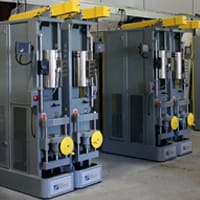 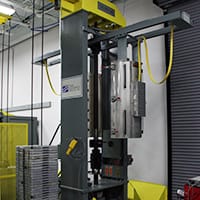 Stress Engineering Services operates a state-of-the-art creep testing facility as part of its laboratory at the Cincinnati office. The facility is equipped with more than 80 dead load test frames capable of performing steady load testing from a few pounds up to 100 kips at temperatures ranging from ambient to 2200°F, together with electro-hydraulic and electro-mechanical machines suitable for testing subcomponents under cyclic and other forms of variable loading.

The creep material testing machines themselves are a mixture of standard models and new designs, such as direct hang – for testing very small specimens – and programmable variable load frames capable of performing relaxation, constant strain rate tests and block loading to simulate two shift operation. These tests are frequently used as integral with projects of wider scope aimed at remaining life assessment of components known to experience complex, variable mechanical load and temperature conditions in accordance with requirements of standard guidelines such as ASME/FFS-1/API 579, the European R5 and the British BS7910 .

We know the importance of Creep Testing, which is why we have invested considerable effort in assuring accurate, stable measurements and data acquisition for both strain, which is measured as a regular practice on all tested, and temperature. Specimen bending, a frequent concern in creep testing is monitored with multiple extensometry and has been demonstrably eliminated from standard testing practice. By careful control of wire sources temperatures are regularly controlled to about +/- 2°F up to 1500°F.

While it is equipped to perform standard creep tests in accordance with ASTM standards, the lab has since its inception, specialized in non-standard tests, as might be necessary to meet the demands of fitness-for-service evaluations performed under extreme constraints. These include ASTM notched tension, notch-bend C-shaped specimens, for exploring stress state and multiaxial effects in development of creep damage.

Creep material testing activities involve on occasion, design and construction of special purpose heaters, extensometers and load frames. Unconventional specimen designs are supported by the good fortune to have the lab and a considerable contingent of highly qualified structural analysts residing under one roof.