An Inside Look at Force Calibration

For force measurement, the process of calibration is the comparison of applied forces indicated by a measurement system under test to a calibration standard. The traceability of the standard used defines the resulting range and accuracy of the system being tested. For example, the ISO-13679 standard (“Procedures for testing Casing and Tubing Connections”) addresses measurement range and accuracy by specifying that the calibration standard must be traceable to the National Institute for Science and Technology (NIST), accurate to within 1% (of reading) and that the calibrated range must encompass the loads to be used in the test program. Upcoming updates to API 5C5 will address tolerances for load control in a test, implying the need to increase accuracy and reduce sources of error. For example the following is being required: “During hold periods, the axial frame load shall be maintained between the target axial frame load ±0.5 % or ±22 kN (5 kips), whichever is greater.”

Measurement traceability begins at the International System of Units (SI) and is defined by the accuracy at each “link in the chain” between the SI standards and the measurement system being used for a test. In the United States, the connection with SI starts at NIST. For force measurement, NIST maintains six deadweight machines ranging from 505 lb to 1,000,000 lb capacity. NIST states that the “relative standard uncertainty of applied force is 0.0005%” for these machines. In the range of 1,000,001 lb to 12,000,000 lb (compression only), calibrations are performed in a testing machine using load cells calibrated in a deadweight machine.

At Stress Engineering Services, we use Class A load cells calibrated by Morehouse Instrument Company (York, PA) to calibrate our OCTG load frames. Morehouse uses deadweight machines for force calibrations up to 120,000 lb with certification traceable to NIST. Load cells (also certified to NIST) are used for forces above 120,000 lb to a capacity of 2,250,000 lb compression (1,125,000 lb in tension). 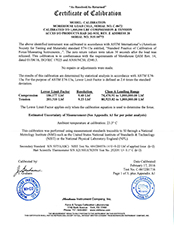 As documented in Figure 2, Morehouse calibrated one of its 1000 kip load cells in tension and compression. Three runs of data were recorded, with the cell rotated between each data run to identify any sensitivity associated with the load cell and the press used for the calibration. The “Class A” lower limit for this system is determined as a function of the standard deviation from the data fit and the system resolution as follows:

The factor of 400 incorporates the 4:1 ratio between steps in traceability, while the 2.4 factor is an empirical constant used in ASTM E74. Note that the lower limit is different for each mode of calibration (tension and compression). 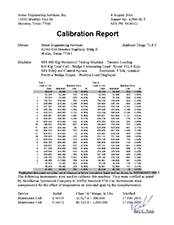 Several factors govern the lowest traceable forces in the calibrated range of a machine. First the calibration standard must be able to provide traceability (with the number of links from NIST) at the desired minimums and the errors associated with the links and the measuring system. The machine must have sufficient resolution such that the indications provided can discern 1% of the reading at the lower bound of the loading range. The machine indications must also be able to demonstrate repeatability over the entire range, particularly in the lowest readings.

For SES’s 800 kip machine (Figure 3), two different calibration standards with overlapping capacities are used to provide traceability from 50 to 900 kip tension and 30 to 600 kips compression. This range may vary between annual calibrations depending on the results at the lowest loads. In August 2016, the tension calibration 40 kip data point was not sufficiently repeatable to meet the 1% specification. This point is represented in the data and highlighted to emphasize that it is for reference only and not part of the certified range.

The frame and standard load cells (Figure 4) are configured so that the set-up can be readily changed between the two standards; they are interchanged several times during both the tension and compression calibration. The systems are exercised to capacity prior to recording data, particularly if the set-up has been changed such as interchanging the standard cells. The ambient temperature is monitored throughout the calibration, and a displacement transducer is used to monitor movement in the frame as the load is cycled.

In addition to the errors associated with the calibration chain between SES and NIST, there are other potential sources of error that can dramatically affect the results of a calibration:

When a calibration certificate is reviewed, the following questions will help users ensure confidence in the accuracy of the calibration:

1. Was the calibration performed with both increasing and decreasing loads?

2. How many runs were completed? A minimum of two runs are typically performed.

3. Does the stated error include the accumulated error from each of the links separating the end user from NIST?

4. Was the measuring system calibrated as a system, including the electronics that will be used during the load measuring?

5. If the calibration was performed using a load bar separated by multiple links from NIST, what errors are introduced?

Using a calibrated bar introduces additional error as it is a link further away from the standard. The electronics used with the bar may not be the same used for its original calibration introducing further unaccounted errors. This is why a calibration bar is used for checking the calibration (see ISO 13679/API 5C5) and not for performing calibration.

Roy has been in the business of performing traceable calibration and load measurement services for over 32 years. Andreas’ expertise is in combined load and fatigue testing of threaded tubular connectors as well as the use of non-linear finite element analyses for the evaluation of structural and mechanical components.

An Inside Look at Force Calibration