Many floating production facilities incorporate a level of instrumentation that measures some combination of motions, environmental parameters, and mooring/tendon tensions.  The use of these data can vary from very basic tasks (helping guide operations such as ballast or mooring-line adjustments) to sophisticated levels of asset integrity.  The benefit of using measured data to understand asset integrity is becoming more and more apparent. Many of these facilities are reaching their intended service life, and the need to facilitate continued service or life extension is increasing.

The response of a floating production facility is complex in terms of loading and interactions, and is dependent on the design, fabrication, and installation processes. The design process is intentionally conservative in order to bound uncertainty in predicted responses; however, the design process depends on certain assumptions.  Due to the complexity of the overall system response, many assumptions can simultaneously be both conservative and non-conservative.  An example is the assumed drag coefficient for a mooring line or riser.  A higher drag coefficient leads to larger offset in current flow, but also increases hydrodynamic damping, which leads to reduced dynamic motion.  A good design will bound the expected responses of the system; however, more accuracy (i.e., reduced conservatism) in the actual system response is desired for asset integrity evaluation.

The fabrication and installation processes also introduce uncertainties into the system condition and behavior.  These uncertainties are created by variability in weld and material quality, fabrication tolerances, installation tolerances, and any deviations from the design.  Furthermore, exposure to the harsh offshore environment leads to performance degradation of engineered structural components.  For example, wall thinning due to corrosion and increased drag due to marine growth reduce the performance of marine risers.

The role of inspections in an asset-integrity program is to provide direct information on the asset condition and behavior, both during fabrication and during in-place service.  Inspections justifiably comprise the majority of a typical asset integrity program.  However, inspections are typically limited to discovering issues that have already occurred or monitoring anomalies that have already been identified. Inspections can only provide information regarding areas that are accessible or visible.  Inspections are also limited in their ability to predict behavior.

The role of analysis or assessment in an asset-integrity program is to predict the response of the “as-is” system.  The analysis models should reflect the actual condition of the system, including as-built, as-installed, and as-inspected information.  The analytical models can also predict the expected response of the system to planned changes from expansion projects, tie-backs, or other changes in service.  However, the analytical models are also limited by the same dependence on assumptions as noted previously for the design process.  Measured data can be used to evaluate and refine the assumptions used in the analytical model.  For instance, measured offset during a loop-current event can be used to evaluate the accuracy of the assumed drag loading on the hull.

The role of measured data in an asset-integrity program is to provide information regarding the actual response of the as-is system to environmental loading.  This information can be utilized for operational purposes; however, limiting the use of measured data to this purpose is a disservice to the asset-integrity program.  High-quality measured data provide the most direct understanding of the actual response of the asset.  This is especially beneficial when used in combination with appropriate analytical techniques to assess the level of conservatism in the design models or assessment models.  The data can also identify whether the models are under-predicting responses.  Understanding the true response of the system greatly expands the benefit of the asset-integrity program by allowing: 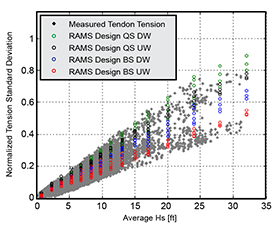 Another use of measured data to validate analytical models is shown in Figure 2, which shows a contour plot of measured seastate data in terms of significant wave height (HS) and zero up-crossing period (TZ).  The white line represents the most probable HS-TZ combinations provided in the design metocean criteria.  The figure clearly shows that the design metocean criteria were accurately developed for this location; however, if the comparison showed differences between the measured data and the design criteria, then a further assessment would be initiated as part of the integrity program to evaluate the effect of this difference. 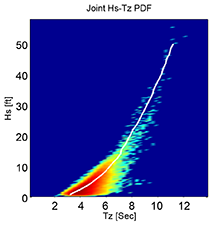 Measured data can be used to quantify fatigue damage accumulation.  Fatigue damage can be directly calculated if appropriate data exist, such as mooring tension measurements or strain gage data.  Fatigue accumulation can be indirectly calculated using a validated analytical model (such as the model discussed in the previous section).  The benefit of using measured data to determine fatigue accumulation is to reduce any conservatism by using the actual loading experienced by the component instead of assumed or factored loading.  Figure 3 provides an example of calculating fatigue damage rate and accumulation for a riser using measured accelerometer data.  An accurate assessment of fatigue damage of the component allows the integrity program to be managed to the greatest possible benefit of the operator. 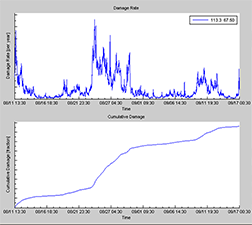 Risk-based inspection plans allow the inspection schedule to be managed while maintaining a desired level of safety and reliability.  The primary components of determining risk are the likelihood and consequence of a failure.  These are both best determined using measured data and a validated analytical model.  The likelihood of a failure can be determined by evaluating the response of a component due to either fatigue loading or an overload condition.  Similarly, the consequence of a failure can be evaluated using the validated analytical model.  Regardless of whether a component failure is a localized event or could lead to progressive failure of the system, any failure can lead to loss of life, loss of production revenue, or environmental damage.

The benefits of measured data to a continued service or life-extension plan are an extension of the benefits to the asset-integrity program.  In many respects, continued service or life extension is a specialized case of asset integrity.  The ability to evaluate past fatigue damage accumulation in combination with the capacity to accurately predict system or component response using future service conditions, allows an accurate projection of the fitness for service of the facility beyond its design life.  The availability of this data may also help satisfy regulatory requirements that would otherwise be difficult to meet.

The effective use of measured data provides a great benefit to an asset-integrity program or continued service/life-extension effort.  The benefit of measured data is further enhanced when used to validate analytical models.  The combined use of analysis and measured data provides a greater understanding of the system behavior than would otherwise be possible, which can allow optimal development of a risk-based inspection program.  In a continued service assessment, inspection and monitoring data provides historical and as-is information, while analytical methods using validated models are used to project beyond the design life.