Addressing the Threat of Coal Silo Failures in Power Plants 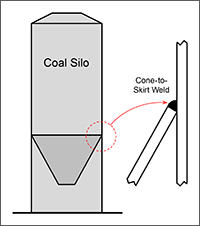 These coal silo failures were unexpected and alarming. And I have found that the more people I talk to about these incidents, the more alarmed I become. In a recent conversation with an inspector, he related that in 2005 at a coal-fired plant in the northeastern region of the US, he discovered a cone-to-skirt weld with about 40% of its length cracked through wall!  Furthermore, none of the people that I have spoken to at utility companies or at forums I’ve attended (EPRI, ASME, and the HSGE User’s Group) were aware of this near miss from 12 years ago. This is strong evidence for the necessity for worldwide communication in the power industry and the critical need to investigate the fitness for service of all coal silos.

To help remedy this situation and prevent future failures, we recommend that all coal silos with a suspended cone design be immediately inspected. Keep in mind that these suspended cones include a cone-to-skirt weld that, due to the geometry and associated reinforcement steel, is not easy to inspect. The use of carbon steel with stainless-steel liners or cladding produces a configuration that is prone to corrosion degradation. Failure Mode Effects Analysis (FMEA) would identify this type of weld as requiring the highest level of quality assurance (QA).

The problem is that this silo construction is not under the jurisdiction of any regulatory codes and no known measures are in place to assure the quality of these welds. Therefore, the combination of metallurgy and welding quality along with difficult-to-verify quality and compliance with the design drawings has produced a challenge that cannot be easily addressed.

While working for a former employer at a construction site in 1982, I witnessed the assembly of a large coal silo.  In this case, the architectural/engineering firm was aware of these issues and required extensive QA during construction. In fact, the inspector for the silo construction (who is still on site today) told me that he thought the QA during construction was a bit excessive, but is very glad now in hindsight.  The point is this: it is imperative that industry recognize this situation and revise the method by which coal silos with a suspended cone design are constructed.

By simply identifying the associated risks and preparing a mitigation plan, operators can diminish the threats to both life and resources. Other useful tasks include:

In my 13 years at Stress Engineering Services, I have been directly involved with these types of incident investigations after the fact. However, my objective is to help the industry stay ahead of this potential hazard. If you would like more information on this subject, feel free to send me a message or Leave a Comment below.

Joe Frey joined Stress Engineering Services in 2004 where he has provided consulting services to the power, chemical, and refining industries regarding fitness for service inspections, evaluations, and recommendations. He began his career in 1980 with a major power company and progressed in condition assessment and field repair for 24 years.

Addressing the Threat of Coal Silo Failures in Power Plants