What’s in a Name?

At the end of this year, Stress Engineering Services will have officially crossed another milestone in the history of our company – 45 years in business!  To commemorate this occasion, we will be publishing a series of articles and Facebook posts over the next 9 weeks that reflects our business and the amazing people who have made it possible.

To kick off our anniversary celebration, here is the story of how our company came to be named “Stress Engineering Services,” written by our co-founder and former president, Dr. Joe Fowler, PE.

WHAT’S IN A NAME? 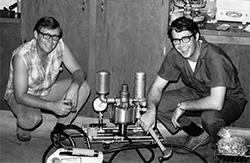 When our company began in November 1972, there were three partners: Harry Sweet, Ray Latham, and Joe Fowler. So, like many entrepreneurs, we named it after ourselves – “Sweet, Latham, and Fowler.” After about two years, Ray decided he really wanted a manufacturing company; thus, he left our company and founded Reflange Inc., which became a successful manufacturing company. After Ray left, Harry Sweet was the majority partner and named the company Harry J. Sweet & Associates.

We continued working and growing under that name until 1983, when a combination of events led to another name change. First, we experienced a downturn in the upstream business. Second, it was clear to most of the partners that we would need to make significant investments into our computer systems and into our test lab business, both of which were doing well at that time. Harry Sweet expressed that he was uncomfortable making those changes and also with the increased management responsibilities of a larger company. He then resigned to return to the business of consulting, his preferred business activity.

So it was clear that we would then need to undergo another name change, but to what name? In a consulting business, clients tend to identify with the specific individual who works with them. So a company name based on the founders’ names may serve as advertising and make good business sense. But if the company grows significantly, soon there will not be enough space in the company name to accommodate everyone. Also, as the company grows and takes on new principals (partners), potential pitfalls arise. If a new partner’s name is not added to the company name, but other partners are listed, this situation divides rather than unites the partners. Given that our goal from the beginning was to build a company where internal cooperation was paramount, we decided that it would be far better over the long term to have a company name that did not include any individual’s name.

But what name? Two factors influenced our decision. First, we consulted a well-known naming consultant about the importance of a company’s name to its success. He confided that, in the long term, it really doesn’t make much difference as long as you stick with the name and continuously promote it. Second, in 1972 Exxon was adopted as the name of all the Standard Oil of New Jersey companies (Esso, Enco, Humble, etc.). If the largest oil company could change its name without adversely affecting its business, why couldn’t we?

So we asked for suggestions from our employees and received a number of good candidates to consider. We finally settled on “Stress Engineering Services Inc.” as our new name in 1984. This name is closely related to all the technical areas in which we practice, and it is easily remembered. And it has worked ever since!!

•  the degree of pressure exerted on a material object measured in units of force per unit area.

Joe R. Fowler is the former President and co-founder of Stress Engineering Services.  He currently serves as Chair of the Advisory Council of the Dwight Look College of Engineering at Texas A&M University, on the Board of Directors of the Offshore Technology Conference, and on the Board of Directors of the Pearl Fincher Museum. Dr. Fowler has received numerous professional awards and merits including being named Ernst & Young Entrepreneur of the Year in the Business Services category for the Gulf Coast Region in 2012.

What’s in a Name?